Scientist foresees a dystopian future where appearance is everything, relationships are forbidden and conformity is enforced through fear

DARTFORD, KENT – 31 March 2014 – Elsewhen Press, an independent UK publisher specialising in Speculative Fiction, is delighted to announce a book deal for a science-fiction suspense trilogy by scientist and medical writer Katrina Mountfort. The Blueprint trilogy takes us to a future in which men and women are almost identical, and personal relationships are forbidden. Following a bio-terrorist attack, the population now lives within comfortable Citidomes. MindValues advocate acceptance and non-attachment. The BodyPerfect cult encourages a tall thin androgynous appearance, and looks are everything.

The first book, Future Perfect, tells the story of Caia, an intelligent and highly educated young woman. In spite of severe governmental and societal strictures, Caia finds herself becoming attracted to her co-worker, Mac, a rebel whose questioning of their so-called utopian society both adds to his allure and encourages her own questioning of the status quo. As Mac introduces her to illegal and subversive information, she is drawn into a forbidden, dangerous world, becoming alienated from her other co-workers and resmates, the companions with whom she shares her residence. In a society where every thought and action are controlled, informers are everywhere; whom can she trust? When she and Mac are sent on an outdoor research mission, Caia’s life changes irreversibly.

A dark undercurrent runs through this story: the enforcement of conformity through fear, the fostering of distorted and damaging attitudes towards forbidden love, manipulation of appearance and even the definition of beauty. This book will appeal to both an adult and young adult audience.

Future Perfect will be published later this year by Elsewhen Press in both digital and print editions. 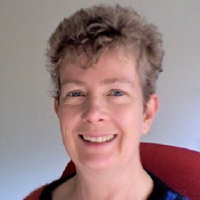 Katrina Mountfort was born in Leeds. After a degree in Biochemistry and a PhD in Food Science, she started work as a scientist. Since then, she’s had a varied career. Her philosophy of life is that we only regret the things we don’t try, and she’s been a homeopath, performed forensic science research and currently works as a freelance medical writer. She now lives in Saffron Walden with her husband and two dogs. When she hit forty, she decided it was time to fulfil her childhood dream of writing a novel. Future Perfect is her debut novel and is the first in the Blueprint trilogy.