In a haunting ritual performed by his father, Steve’s soul is linked to Julia, an innocent. To protect her, Steve haunts her dreams, but it has the opposite effect and now he can’t dream without her.

DARTFORD, KENT – 18 May 2015 – Elsewhen Press, an independent UK publisher specialising in Speculative Fiction, is delighted to announce the signing of a deal with Canadian author Tanya Reimer for her post-apocalyptic supernatural fantasy Can’t Dream Without You, a novel from the Dark Chronicles.

Legends say that tens of thousands of years ago, Whisperers were banished from the heavens, torn in half, and dumped on a mortal realm they didn’t understand. Longing for their other half, they went from being powerful immortals to lonely leeches relying on humans to survive. Over the years, they earned magic from demons, they left themselves Notebooks with hints, and by pairing up with human souls, they eventually found their other halves. Humbled by their experiences, they discovered the true purpose of life and many were worthy of returning to the heavens. But many were not.

The Dark Chronicles are stories that share the heartache of select unworthy Whisperers on their journey to immortality after The War of 2019. Can’t Dream Without You is one of those stories, in which we meet Steve and Julia, two such heroes.

Steve isn’t a normal boy. He plays with demons, his soul travels to a dream realm at night using mystical butterflies, and soon he’ll earn the power to raise the dead. Al thinks that destroying him would do the world a favour, yet he just can’t kill his own son. Wanting to acquire the power that raises the dead before Steve does, Al performs a ritual on Steve’s sixteenth birthday. He transfers Steve’s dark magic to Julia, an innocent girl he plans to kill. But Steve is determined to save Julia and sucks her soul to Dreamland. From the dream world, he invokes the help of her brother to keep her safe.

Five years later, Steve can’t tell what’s real or what’s a nightmare. Julia’s brother wants to kill him, a strange bald eagle is erasing memories, and Steve’s caught in some bizarre bullfight on another realm with a cop hot on his trail looking to be Julia’s hero. All the while, Steve and Julia must fight the desperate need to make their steamy dreams a reality.

According to Peter Buck, Editorial Director at Elsewhen Press, the post-apocalyptic world of the Whisperers that Tanya has created is “recognisably contemporary, yet with a rich and deep mythology distinguishing it from our own world while at the same time making it much more credible. These are characters you might expect to meet, but really wouldn’t want to!”

Tanya has previously published Petrified, a young adult story from the world of the Whisperers, but Can’t Dream Without You is the first of the Dark Chronicles and is written for adults. It will be published early in 2016 by Elsewhen Press in both digital and print editions. 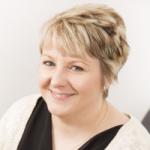  Born and raised in Saskatchewan, Tanya enjoys using the tranquil prairies as a setting to her not-so-peaceful speculative fiction. She is married with two children which means among her accomplishments are the necessary magical abilities to find a lost tooth in a park of sand and whisper away monsters from under the bed. As director of a non-profit Francophone community center, Tanya offers programming and services in French for all ages to ensure the lasting imprint and growth of the Francophone community in which she was raised. What she enjoys the most about her job is teaching social media safety for teens and offering one-on-one technology classes for seniors.

Tanya was fifteen when she wrote her first column. She has a diploma in Journalism/Short Story Writing. Today, she actively submits to various newspapers, writes and publishes the local Francophone newsletter for her community, and maintains a blog at Life’s Like That. In 2014 her debut novel Ghosts on the Prairies a Sacred Land story for adults was published by Elsewhen Press, followed by Petrified a mid-grade Whispering novel, from Sunbury Press.