Embarking on a journey in space and time finally leads September Weekes to discover her true identity – the key to the survival of all the universes.

DARTFORD, KENT – 2 January 2016 – Elsewhen Press, an independent UK publisher specialising in Speculative Fiction, is delighted to announce the publication today of Unity of Seven by Peter R. Ellis. Following on from The Power of Seven, it is the third and final volume in the epic Celtic fantasy series Evil Above the Stars. Launched a year ago with Seventh Child and then The Power of Seven, this series has been thrilling readers of all ages. Appealing right across the speculative fiction genre, it is especially popular with fans of JRR Tolkien and Stephen Donaldson.

September is back home and it is still the night of her birthday, despite having spent over three months in Gwlad battling the Malevolence at the seventh conjunction of the planets. She no longer has the Maengolauseren nor the powers it gave her. It is back to facing the bullies at school and her struggles with her weight and studies, but she worries about how well the people of Gwlad have recovered from the terror of the Malevolence. She is also unsure what happened to Malice/Mairwen as she’d been told that twins could be joined together. Is Malice inside her? Could she turn to evil?

She must discover a way to return to the universe of Gwlad, and the answer seems to lie in her family history. The five Cludydds before September and her mother were their ancestors. The clues take her on a journey in time and space which reveals that while in great danger she is also the key to the survival of all the universes. September must overcome her own fears, accept an extraordinary future and, once again, face the evil above the stars.

This exciting series from Peter R. Ellis explores intriguing possibilities: If old theories are correct until a new idea comes along, could it be that the universe actually changes with our perception of it? Were the ideas embodied in alchemy ever right? What realities were the basis of Celtic mythology?

Unity of Seven is published in digital editions today by Elsewhen Press. It will be published in a print edition in March. 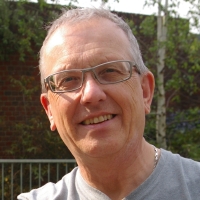  Peter would like to say he’s been a writer all his life but it is only since retiring as a teacher in 2010 that he has been able to devote enough time to writing to call it a career. Brought up in Cardiff, he studied Chemical Physics at the University of Kent at Canterbury, then taught chemistry (and a bit of physics) in Norwich, the Isle of Wight and Thames Valley. His first experience of publishing was in writing educational materials which he has continued to do since retiring. Of his fictional writing, Evil Above the Stars is his first published speculative fiction series.