In his latest book, It’s Just the Chronosphere Unfolding as it Should, Canadian satirist Ira Nayman uncovers strange activity in small town; Time Agency claims it is not the cause but is investigating

People who have been thought to be long-dead are appearing in the small and otherwise unimposing, even uninteresting (no offence), town of Dingle Dell. These are not zombies, reincarnations, or doppelgängers, but the victims of temporal rendition – removed from their own time and deposited together in the here-and-now (well at least Radames’ here-and-now, which for us would be there-and-then). When Radames investigates, she receives various degrees of co- operation from the victims and their shocked hosts and, on discovering the supposed cause, is led back to her previous case (such is the nature of time travel anomaly investigation). Various university research departments around the world have been the epicentres of multiple concentrations of déjà vu events, each only a small time-disturbance but together adding up to a potential disaster in the offing – and no one wants an offing disaster. The scientists are oblivious and Radames must track down the real culprit, even if it means going to Digitaleusia.

In Ira’s new novel, we not only follow Radames on her latest case, followed by her previous case (time travel’s like that) but, on the way, we find out more about the Time Agency itself and why it’s organised like a Library. As with the three previous novels in his Transdimensional Authority series – Welcome to the Multiverse (Sorry for the Inconvenience), You Can’t Kill the Multiverse (But You Can Mess With its Head), and Random Dingoes – the cover of It’s Just the Chronosphere Unfolding as it Should features the distinctive artwork of New York artist Hannah B. Farrell, reflecting the international nature of Elsewhen Press.

When asked about his new novel, Nayman, who is celebrating his *REDACTED*th birthday today, said “Mmmm nngh hggh mnmmph” – unfortunately there was no time to wait for him to finish eating his cake.

It’s Just the Chronosphere Unfolding as it Should, published today by Elsewhen Press on popular eBook platforms, will also be available in paperback from the 10th October 2016. 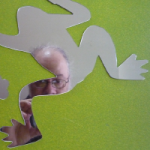 In his past lives, Ira Nayman was, among other things: a cave painter whose art was not appreciated in his lifetime; several nameless peasants who died before their 20th birthday during the Dark Ages; a toenail fungus specialist in the court of Louis XIV; and Alan Turing’s scullery maid. In his current incarnation, Ira is the creator of Les Pages aux Folles, a Web site of political and social satire that is over 10 years old (that’s positively Paleolithic in Internet years!). Five collections of Alternate Reality News Service (ARNS) stories which originally appeared on the Web site have been self-published in print. Ira has produced the pilot for a radio series based on stories from the first two ARNS books; “The Weight of Information, Episode One” can be heard on YouTube. Ira has also written a series of stories that take place in a universe where matter at all levels of organization has become conscious. They feature Antonio Van der Whall, object psychologist.

Ira’s Web Goddess tells him he should make more of the fact that he won the 2010 Jonathan Swift Satire Writing Contest. So, Ira won the 2010 Jonathan Swift Satire Writing Contest. In another life (but still within this incarnation) Ira has a Masters degree in Media Studies from The New School for Social Research which was conducted entirely online. He also has a PhD in Communications from McGill University. Ira taught New Media part-time at Ryerson University for five years.

Whoever created the Karmic wheel has a lot to answer for…

About Hannah B. Farrell 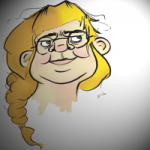 Hannah Farrell is an American Artist currently studying animation at Minneapolis College of Art and Design. She is influenced heavily by French animator, Sylvain Chomet, who introduced her into the beautiful art of characters. Hannah is very playful with the bodies she creates and looks forward to the transition from still picture to moving picture. That being said, Hannah has been very happy as a freelance illustrator. She doesn’t know where her art career will go in the next few years, but she’s enjoyed it so far and is nothing but optimistic.

Hannah has been commissioned to illustrate the covers of all four of Ira’s Transdimensional Authority books because her playful and individual art style complements the humour of Ira’s stories so well.