The Eternity War is still being waged and the Academy remains caught up in it. The new Principal is an angel, the Teratology teacher is a vampire, the Instrument of Peace is hiding, but who is the Instrument of War?

DARTFORD, KENT – 24 April 2017 – Elsewhen Press, an independent UK publisher specialising in Speculative Fiction, is delighted to announce the latest book by New Zealand author Rebecca Hall. Instrument of War is the second book of Symphony of the Cursed, a YA fantasy trilogy set in the central North Island of New Zealand. Instrument of War continues from Instrument of Peace, the first book in the trilogy, as Mitch, Hayley and Nikola return for their final year in the International Academy of Magic at Lake Moawhango. The Angels are coming…

The Host wants to know what the Academy was trying to hide and why the Fallen agreed to it. They want the Instrument of War, the one thing that can tip the Eternity War in their favour and put an end to the stalemate. Any impact on the Academy staff, students or buildings is just collateral damage.

Mitch would like to forget that the last year ever happened, but that doesn’t seem likely with Little Red Riding Hood now teaching Teratology. The vampire isn’t quite as terrifying as he first thought, but she’s not the only monster at the Academy. The Fallen are spying on everyone, the new Principal is an angel and there’s an enchanting exchange student with Faerie blood.

Angry and nervous of the angels surrounding him, Mitch tries to put the pieces together. He knows that Hayley is the Archangel Gabriel. He knows that she can determine the course of the Eternity War. He also knows that the Fallen will do anything to hide Gabriel from the Host – even allowing an innocent girl to be kidnapped.

Peter Buck, Editorial Director at Elsewhen Press, said “With her exciting trilogy, Rebecca has firmly established New Zealand as a location for contemporary fantasy, not just Middle Earth! Fans of YA fantasy, readers of all ages, have been captivated by Instrument of Peace, impressed by Rebecca’s well thought-through magic system, the depth of her characters, and the believable nature of their relationships. What comes next in Instrument of War will both enchant and surprise. We are delighted to be able to help Rebecca bring her vision and talent to such an appreciative audience.”

Instrument of War, Book II of the Symphony of the Cursed trilogy, will be published in eBook formats in June 2017 and in paperback in September 2017. 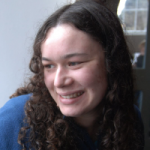 Rebecca started writing when she was supposed to be studying for her exams at Otago University but somehow passed anyway, eventually graduating with a decorative piece of paper. She moved to the UK to pursue a career in publishing and after a couple of mishaps ended up in Edinburgh and sold Symphony of the Cursed to Elsewhen Press, which is not quite the career she had in mind. The career she did have in mind was along more editorial lines, which is why she is now a volunteer at Inspired Quill and a freelance copy-editor for everyone else. She also has a blog
which she infrequently remembers to update, where those mysterious things known as short stories can be found.