Futures, the UK’s first science fiction colouring book for adults, caught the eye of Danish publisher Lars Stender who snapped up the Danish rights in a bid to launch de-stressing for Danish scifi fans.

DARTFORD, KENT – 12 June 2017 – Elsewhen Press, an independent UK publisher specialising in Speculative Fiction, is delighted to announce the sale of the Danish rights of Futures by Alison Buck. Originally published in early 2016, Futures was the UK’s first colouring book specifically for adult fans of science fiction. The rights have been bought by L. Stender e-books (LSe), a Danish publisher specialising in science fiction and fantasy. LSe and Elsewhen Press have been maintaining contact since meeting at the 2014 World Science Fiction Convention (Worldcon) in London.

Alison is delighted that her book is being made available in a Danish edition. “A colouring book for adults is not really limited by language or national borders. Especially in science fiction where we’re not even restricted to one planet!” 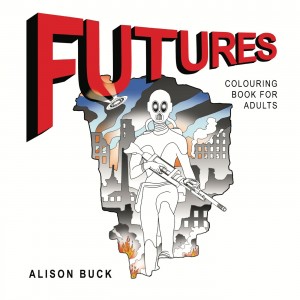 Futures was conceived when there had been a surge of interest in adult colouring books, accompanied by a range of claims about how they can de-stress one’s life, help one unwind, relax, self- express, achieve mindfulness, banish anxiety or even deal with a traumatic experience. But many of the colouring books that were available had been filled with abstract images such as mandalas, or natural objects such as flowers and butterflies, leaving fans of science fiction with no way to participate while remaining immersed in their chosen genre.

Futures contains science fiction artwork for the reader to colour. The images range from the retro feel of 50s pulp paperback covers, to simplified but accurately rendered views of the heavenly bodies of our solar system as a space probe passes through on a fly-by; from androids that look human, to humans that look alien; aliens that look alien; aliens that are trying to blend in; and both sides in a space war. All 31 of them are original artwork by the artist Alison Buck, creator of many science fiction and fantasy book covers.

Therapy? Fun? Escapism? That depends on the reader’s imagination. Pages can be coloured in the book, or cut out to colour in and frame. Each image is on a separate page with nothing on the back apart from the image title and some space for the colourist to sign it. Once coloured they can even be given as a gift to that special someone (man, woman, child, cyborg). The colourist can use the appropriate colours (we all know aliens are green, right?) or they can let their imagination and creativity guide them to colour them in any way they like. There is plenty of room for them to add their own creative elements – a bird in the sky flying over an alien landscape, a logo on a military uniform or spaceship…

The Danish edition of Futures will be available later this year from L. Stender e-books. 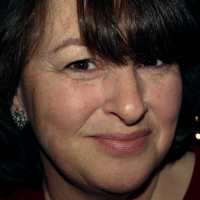 Alison is a figurative and landscape artist and has exhibited and sold paintings of various styles throughout her career. Latterly she has increasingly been working on larger canvases, focusing on the natural world, trying to capture the transient and transforming effects of light and movement within landscapes. For almost twenty years she has also been working as a commercial graphic designer, running a design studio and producing graphics and artwork for corporate clients, book covers and illustrations. Alison is also an accomplished author.

Founded in Denmark in 2013, by Lars Stender, LSe (L. Stender e-books) publishing company specialises in science fiction and fantasy ebooks with stories that endeavour to redefine and revive both genres by widening the scope of stories and by targeting a wider audience. The human imagination is boundless, and L. Stender e-books intends to provide readers with a universe that reflects just that.