The Ghost in You is a first-hand account, from beyond the grave, by an innocent girl who dies before her time and tries to make sense of what is happening to her, while helping her friends and discovering her purpose.

DARTFORD, KENT – 26 January 2018 – Elsewhen Press, an independent UK publisher specialising in Speculative Fiction, is delighted to announce the publication of The Ghost in You, the latest novel by Katrina Mountfort. A ghost story with a difference, told in the first person by the ghost herself. It addresses what awaits us when we die, the age-old concern of life after death, felt most keenly when a person is taken too soon. Along the way it also considers what it means to be soulmates.

No-one knows what happens when we die. There are theories; there are hopes; there are dreams. But eventually we all find out … Rowena had never thought about it. She was only 19 and hadn’t even experienced her first kiss. Dying was the last thing she expected; or rather, what followed was the last thing she expected. With no blinding light… no choirs of angels… it actually took her a while to realise that she was in fact dead, although seeing her own body at the foot of the stairs was a big clue.

What do you do if you’re dead but haven’t ‘moved on’? In Rowena’s case, you keep finding yourself back where you died, with very little control over when; sometimes you can be away for days, weeks or even months, and then you’re back. Between times, when you’re ‘away’, where do you go, what do you do? You’ve seen some other ghosts asleep at their graves, but you don’t even know where your own grave is. The Living shiver if they walk through you, but they can neither see nor hear you. With practice you can pass through walls and doors, but curiously you can also sit on a park bench without falling through it, climb stairs, even lie on a bed. You’re stuck in the clothes you were wearing when you died, at the age you died. Waiting. Then, after years of this intermittent existence, you realise what you have been waiting for, what it is that you have to do in order to finally move on. Just as you have found the best reason to stay.

The cover image, by artist Alison Buck, illustrates Rowena’s ghost asleep ‘between times’ and is based on a photograph, showing Rowena’s grave in her quiet Suffolk village churchyard. 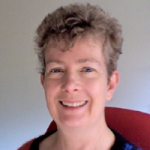 Katrina Mountfort was born in Leeds. After a degree in Biochemistry and a PhD in Food Science, she started work as a scientist. Since then, she’s had a varied career. Her philosophy of life is that we only regret the things we don’t try, and she’s been a homeopath, performed forensic science research and currently works as a freelance medical writer. She now lives in York with her husband and two dogs. When she hit forty, she decided it was time to fulfil her childhood dream of writing a novel. Her debut novel, Future Perfect, the first book in the Blueprint trilogy, was published by Elsewhen Press in 2014, followed over the next two years by the rest of the trilogy, Forbidden Alliance and Freedom’s Prisoners. Now Katrina returns to Elsewhen Press with The Ghost in You.