The Sooty Feathers Club protects a dangerous underworld controlling the City of Glasgow, encouraging police and press to look the other way. David Craig reveals all in Resurrection Men, the first book in the Sooty Feathers series.

DARTFORD, KENT – 06 August 2018 – Elsewhen Press, an independent UK publisher specialising in Speculative Fiction, is delighted to announce the forthcoming publication of Resurrection Men by Glasgow-based author David Craig. It is the first book in his Sooty Feathers series, a masterful gothic tale about a supernatural war for control of the Second City of the British Empire, and the struggle of flawed characters of uncertain virtue trying to avert it. In the late 19th century, Glasgow was ruled by the undead – from the private clubs, town houses and country estates of the privileged to the dung-choked wynds and overcrowded slums of the poor. Undead unrest, a fallen angel, and religious zealots intent on driving out the forces of evil, set the stage for a diabolical conflict of biblical proportions.

Resurrection Men is David’s debut novel. In it, he provides an atmospheric portrayal of Glasgow in 1893 which acts as a thrilling introduction to this accomplished series, deftly pulling the reader in to a well-researched and almost tangible bygone world still glimpsed in the city today. The erstwhile heroes, a student and a laudanum-addicted pharmacist, are pursuing extra-curricular careers as body snatchers – the ‘resurrection men’ of the title – when they find themselves entangled in the world hidden beneath the veneer of respectable society. Luckily they are not alone for long, as unexpected allies join their fight.

David’s book explores what it is that drives people to face evil, and what it costs them. Some characters are initially drawn into the fray by misfortune, and even when they try to walk away tragedy drags them back in. Others have been broken to some degree by years of fighting the undead and their mortal allies.

The cover, designed by artist Alison Buck, captures the atmosphere of David’s book. The dark and grimy alleys where bodies are found suffering from severe loss of blood, having had their throats ripped out; the fine, elegant streets and squares in which the elite and learned rise above the smoke and filth in careless disregard. On reading the book prior to designing the cover, Alison said “Resurrection Men is an impressive fictionalised account of the forces controlling 19th century Glasgow, which will appeal to fans of gothic fiction as well as historians and others intrigued by life, and death, 125 years ago.”

Resurrection Men will be available on all popular eBook platforms from 31st August 2018. The paperback edition will be launched at FantasyCon in Chester, in October 2018. 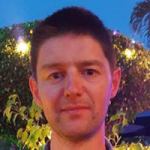 Aside from three months living on an oil tanker sailing back and forth between America and Africa, and two years living in a pub, David Craig grew up on the west coast of Scotland. He studied Software Engineering at university, but lost interest in the subject after (and admittedly prior to) graduation. He currently works as a resourcing administrator for a public service contact centre, and lives near Glasgow with his wife and two rabbits.

Being a published writer has been a life-long dream, and one he is delighted to finally realise with this, his debut novel. Resurrection Men is the first book in the Sooty Feathers series.