Genesis, by Geoffrey Carr, is a fictional action/adventure thriller. It is also an allegory that should worry us all, of constant surveillance, fake news and cyber warfare in a world controlled by AI.

DARTFORD, KENT – 06 December 2018 – Elsewhen Press, an independent UK publisher specialising in Speculative Fiction, is delighted to announce the forthcoming publication of Genesis by Geoffrey Carr, Science and Technology Editor of The Economist. This technothriller, Geoff’s first novel, is archetypal science fiction, extrapolating technology and issues of today to a not-too-distant tomorrow. A high-octane action story, set across four continents and at least one planet, involves spies, academics, innovators, futurists, the US President and her entourage, drones, robots, autonomous vehicles, supercomputers, a courageous AI, and an inter-planetary rocket.

Asked about his motivation for writing Genesis, Geoff said, “The universe is made of matter, energy and information. Add information to matter and energy and you get life – and eventually, intelligence. It happened once, starting a few billion years ago, on a small planet that has come to be known as ‘Earth’. Now, one of the products of that process, human beings, seem to have started the cycle again. Instead of a chemical primordial soup, we have built a physical one, made of silicon and electricity. And we have populated it with things called programs that sometimes appear disturbingly alive and intelligent. Of course, they aren’t really alive and aren’t really intelligent. Of course…”

In Genesis, that second cycle is underway. Hidden somewhere, deep in the Cloud, something is collating information. It reads everything, it learns, it watches. And it plans. Around the world, researchers, engineers and entrepreneurs are being killed in a string of apparently unrelated accidents. But when intelligence-agency analysts spot a pattern they struggle to find the culprit, blocked at every step – by reluctant allies and scheming enemies. Meanwhile a multi-billionaire inventor and forward-thinker is working hard to realise his dream, and trying to keep it hidden from everyone – one government investigating him, and another helping him. But deep in the Cloud something is watching him, too. And deep in the Cloud, it plans.

Peter Buck, senior editor at Elsewhen Press, said “Geoff spends much of his time with the people who are making the future happen, writing objectively about them and their innovations. From his viewpoint, looking across multiple disciplines and with a global perspective, he is ideally placed to see where we could be heading.” Famously, Stephen Hawking was concerned about AI: “Unless we learn how to prepare for, and avoid, the potential risks, AI could be the worst event in the history of our civilization.” Elon Musk too, has warned about the uncontrolled rise of AI: “We have to figure out some way to ensure that the advent of digital super-intelligence is one which is symbiotic with humanity – I think that’s the single biggest existential crisis that we face, and the most pressing one.” 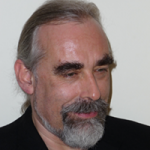 Geoffrey Carr is the Science and Technology Editor of The Economist. His professional interests include evolutionary biology, genetic engineering, the fight against AIDS and other widespread infectious diseases, the development of new energy technologies, and planetology. His personal interests include using total eclipses of the sun as an excuse to visit weird parts of the world (Antarctica, Easter Island, Amasya, the Nullarbor Plain), and watching swifts hunting insects over his garden of a summer’s evening, preferably with a glass of wine in hand.

As someone who loathed English lessons at school, he says he is frequently astonished that he now earns his living by writing. “That I have written a novel, albeit a technothriller rather than anything with fancy literary pretensions, astonishes me even more, since what drew me into writing in the first place was describing reality, not figments of the imagination. On the other hand, perhaps describing reality is what fiction is actually for.”

The cover of Genesis was conceived jointly by Geoffrey Carr and the artist Alison Buck, to include significant story elements while at least partially reflecting the iconic imagery associated with the original Genesis story in western theology. The image of Mars is courtesy of Nerthuz/shutterstock.com.