Latest novel from Simon Kearns is a literary fusion of science fiction, existential terror and psychological thriller in the style of the ‘New Weird’

DARTFORD, KENT – 22 January 2021 – Elsewhen Press, an independent UK publisher specialising in Speculative Fiction, is delighted to announce the publication of The Night Has Seen Your Mind by Simon Kearns. In an isolated house in the snowy wasteland of the Arctic, five people take part in a cryptic experiment funded by a tech billionaire – although they will be well rewarded financially, have they even considered the potential psychological impact, and is it worth the gamble? Crossing genres, this story is the epitome of modern speculative fiction.

Peter Buck, Editorial Director of Elsewhen Press said, “Especially pertinent as we all live through yet another lockdown, Simon Kearns has successfully leveraged our inherent fear of isolation and bleakness to make us identify with his diverse characters as they slowly try to come to terms with their prolonged stay in the Arctic. That anxiety combines with a natural suspicion of hi-tech entrepreneurs, distrust of intrusive devices that attempt to read your mind, and the inevitable suspicion of stir-crazy strangers. The result is an exciting yet very well-grounded story that may literally blow your mind. Not only is sex and drugs and mind control an appropriate tagline for the story, it may also turn out to be how many readers have coped with lockdown.”

The Night Has Seen Your Mind is available from today in eBook format and will be available in paperback from 22nd March. 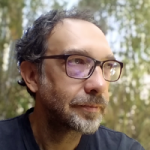 Simon Kearns was born in London in 1972 and grew up in Northern Ireland. In his teens he returned to London to study philosophy. At the end of 2004 he moved to the south of France where he lives with his partner and two children. His debut, Virtual Assassin, (Revenge Ink, 2010), explores personal responsibility in a corrupt society. It was followed by Dark Waves, (Blood Bound Books, 2014), about a powerful haunting and the scientist determined to debunk it. His stories have appeared in publications such as The Future Fire, Litro, The Honest Ulsterman, and on numerous websites.

He revels in etymology, guitar, gaming, and the science of superstition.

About The Night Has Seen Your Mind

Tech billionaire, Mattias Goff, has invited five creative professionals – programmer, pianist, writer, actor, and photographer – for a month-long residency at Crystal Falls, his Arctic retreat. Researching brain waves, and especially the enigmatic gamma wave, Goff asks his guests to wear a kind of EEG cap in order to record the electrical activity in their brains while they engage with their respective disciplines. Although they will be paid $5Million each for the experience, they all start their sojourn a little wary – some more than others. Cut off from the outside world in the stunningly beautiful, if stark, Alaskan winter landscape they immerse themselves in their work. Soon, though, reality seems to be shifting. What is Goff really researching? Are his guests only being observed, or manipulated?

Cutting across genres, The Night Has Seen Your Mind is a literary fusion of science fiction, existential terror and psychological thriller in the style of the ‘New Weird’.