DARTFORD, KENT – 19 March 2021 – Elsewhen Press, an independent UK publisher specialising in Speculative Fiction, is delighted to announce the publication of Far Far Beyond Berlin by Craig Meighan. A satire on bureaucracy, it imagines the Biblical Genesis story as God’s seventh and final attempt to get his creation right. But what happened to the previous six universes? They still exist and one unlucky government worker accidentally gets transported to the first and must find his way home through each of them, which could have apocalyptic consequences for all seven universes and God himself.

Craig Meighan had written for short films, radio jokes and stand-up comedy but hadn’t been making a career in it. He joined the civil service and initially enjoyed it, but three governments, 4 Prime Ministers and 12 years later, he found himself in the odd position of working very hard to achieve things that were the exact opposite of his moral beliefs.

The decisive moment came when he received an existentially terrifying pension statement that suggested he’d have a further 38 punishing years until retirement. Afraid that he’d be stuck in the job forever, he told his wife Jen that he felt like he was wasting valuable time.

Craig says: “My retirement age was projected at 71. I checked my life expectancy and, because I’m from a predominantly working class bit of Scotland, that was projected at 68! I had a better chance of dying during a zoom call about welfare policy than I did of enjoying a retirement. Jen asked what I wanted to do with my life and I told her what she already knew, that I wanted to be a writer. She asked the killer question, which was, ‘Why aren’t you trying to do it?’ I didn’t have a good answer. She read my work and told me that she believed I was good enough to write professionally, that I would always regret it if I didn’t give it my full undivided attention to see where it could take me and that I should quit my job and just write. If I was no further forward after a year, I could go and get an office job again and at least I’d know that I’d tried. The next day I handed in my notice to the job I’d held for 12 years. When someone shows that level of support to your dream, you have to give it everything. You owe them 100% effort.”

Craig finished his book and submitted it to various publishers. Peter Buck, Editorial Director of Elsewhen Press takes up the story: “As soon as we read it, we knew we’d love to publish it. The combination of fantasy, satire, and playing with the creation mythos, was irresistible. If you can imagine Hitchhiker’s in the style of Pulp Fiction, you’ll understand why we were hooked right away. We asked Craig which of the characters in the book were inspired by the ministers that he had worked for, but he wouldn’t tell us. The pandemic has delayed our publication schedule but we’re delighted that we can now share Craig’s book with readers, and they can try to guess for themselves.”
Craig adds: “Sometimes it’s all you need: one person to show some belief in your abilities, one person to back you. It’s nice to repay that faith, even if how you repay it is to write a book which features a sentient almond. I now spend most of my week writing fiction and I am 6000% happier than I was before. So Jen’s support has completely changed my life for the better, come what may.”

Far Far Beyond Berlin is available from today as an eBook, and in paperback on 17th May. 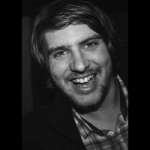 Craig Meighan was born in Lanarkshire, in central Scotland. Both a keen drummer and a fan of science fiction, he grew up wanting to be either Animal, from The Muppets, or Douglas Adams. This has led to an unfortunate habit of smashing up his computer at the end of each writing session.

With the ambition of becoming a screenwriter, he attended film college in Glasgow. He spent a short time making corporate videos and then after attending one chance meeting, he accidentally joined the civil service. Intending to stay for one summer, he ended up staying for 12 years (so think carefully before inviting him round for tea).

He is too polite to say which of the killer robots, demons and other assorted antagonists that appear in his book, are based on his interactions with actual government ministers.

His first novel, Far Far Beyond Berlin, was written in the evenings, after work, every day for a year, at the end of which time his wife Jen convinced him it was time to finally leave the safety of the office job and pursue writing full-time. She cunningly incentivised him by promising that if he managed to get his book published, he could get a big dog.

Craig lives with Jen, just outside Glasgow, where they like to play softball, enter pub quizzes and do escape rooms. He is delighted to say that he is now the proud owner of a huge daft greyhound named Ralph.

About Far Far Beyond Berlin

Not everything goes to plan at the first attempt… In Da Vinci’s downstairs loo hung his first, borderline insulting, versions of the Mona Lisa. Michelangelo’s back garden was chock-a-block full of ugly lumps of misshapen marble. Even Einstein committed a great ‘blunder’ in his first go at General Relativity. God is no different, this universe may be his masterpiece, but there were many failed versions before it – and they’re still out there.

Far Far Beyond Berlin is a fantasy novel, which tells the story of a lonely, disillusioned government worker’s adventures after being stranded in a faraway universe – Joy World: God’s first, disastrous attempt at creation.

God’s previous universes, a chain of 6 now-abandoned worlds, are linked by a series of portals. Our jaded hero must travel back through them, past the remaining dangers and bizarre stragglers. He’ll join forces with a jolly, eccentric and visually arresting crew of sailors on a mysteriously flooded world. He’ll battle killer robots and play parlour games against a clingy supercomputer, with his life hanging in the balance. He’ll become a teleportation connoisseur; he will argue with a virtual goose – it sure beats photocopying.

Meanwhile, high above in the heavens, an increasingly flustered God tries to manage the situation with His best friend Satan; His less famous son, Jeff; and His ludicrously angry angel of death, a creature named Fate. They know that a human loose in the portal network is a calamity that could have apocalyptic consequences in seven different universes. Fate is dispatched to find and kill the poor man before the whole place goes up in a puff of smoke; if he can just control his temper…