DARTFORD, KENT – 30 April 2021 – Elsewhen Press is a publishing house that pushes the boundaries in speculative and fantasy fiction. Their stories present otherworldly but terrifyingly prescient visions of the future, featuring Android writing machines, body-augmenting mind control and transdimensional crime-fighting. However, present-day technology can also feel like it has been sent from a future world, where even a watch can save a life.

Following complications with his heart over the Easter period, Peter Buck, co-founder and editorial director of Elsewhen Press, needed hospital treatment. But it wasn’t a doctor that told him he needed to dial 999 – it was his Apple Watch! 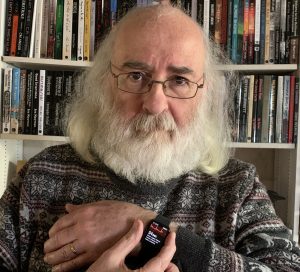 Buck explained: “My wife bought me the Apple Watch for Christmas because it measures heart rate, blood oxygen and ECG. Being of a nervous disposition when it comes to my heart, because I’ve suffered from hyper-tension for many years, I had been checking my ECG whenever I felt a skipped beat or ‘a bit funny’.

“Every time, the watch reassured me that it was a sinus rhythm and perfectly okay. However, over Easter, for the first time, it told me I was suffering from atrial fibrillation with a very high heart rate. Even so, I did it again a couple more times over the next hour or so with the same result, so was convinced by the watch that it was a genuine heart condition and not me being a hypochondriac.

“Later, when I saw the cardiologist in the hospital, he was impressed by the output from the watch’s ECG app. He wanted to do an echocardiogram and produced what looked like a tricorder from his pocket, grinned and said ‘You’re not the only one with fancy tech!’”

Thankfully, after a few hours of treatment, Peter was sent home to recover with a newfound appreciation for science fiction-inspired machinery.

Buck added: “It was a victory for geekdom, as a sci-fi gadget saved my life (as well as the NHS). The doctors told me that if I had not come into the hospital immediately, it could have been much worse, possibly fatal.”