Reading to escape from the realities of life has become more widespread during the pandemic, yet many readers are turning to fantasy worlds where politics and unrest are just as real.

DARTFORD, KENT – 26 October 2021 – Elsewhen Press is a publishing house specialising in high quality, entertaining and thoughtful speculative fiction, often addressing current, real-world issues through a fictional prism. This includes fantasy books, which have long been seen as a way of escaping from the real-world. Authors too, get to escape into a world of their own imagination. Building a believable and engaging world is the hallmark of a talented author. One such author is Juliet Kemp, who has built a world and a series of books that have been gaining attention and much admiration from other award-winning authors such as Aliette de Bodard, Rivers Solomon and Malka Older.

The trite advice often given to new authors is ‘write what you know’. When it comes to a fantasy setting, is that really possible? Yes, according to author Juliet Kemp. The setting for Juliet’s Marek series is a port called Marek, part of a larger state called Teren, but virtually an autonomous city-state of its own. Politics, both civic and national, plays a large part in the life of the main protagonists – alongside magic and demons. While the supernatural elements are outside any author’s normal experience, Juliet can conjure the politics with some authority. “I have an academic background in politics, and have worked and volunteered in campaigning and activist organisations,” says Juliet. “I’m fascinated by the nuts and bolts of politics in its broadest sense: how people make things happen, how they negotiate and compromise or refuse to. How they interact with one another in groups that have shared goals, and what happens when those goals don’t align, or don’t align quite enough. How people are forced to make pragmatic decisions, when they refuse to, and what information they choose to listen to or ignore. Making things happen can be a messy process, and sometimes you have to work with people you’d rather not; I wanted to reflect that messy reality, and the fact that sometimes people make bad decisions, in Marek’s politics.” The latest Marek book, The Rising Flood, includes unrest both in the capital city of Teren where dissenters are being threatened with demons, and also in Marek itself where a frustrated underclass is seeking a voice. Juliet again, “In this book I also introduced those campaigning for change from a different angle; there’ll be more of that in the next book, which draws further on political history and the radical movements I’ve always been fascinated by.”

But why is Marek a port on the Oval Sea, with the river being such an important presence? Juliet admits it’s more of ‘what you know’, “I’ve lived in river cities all my life, and these days I spend my working day looking out at the Thames. No surprise that Marek’s river has become increasingly important over the series. Of course, lots of cities are built on rivers: they’re a water source, transport source. In Marek’s case, they define its history, founded as a port for Teren – and in choosing to make it the port for Teren, I could create more possibilities for political tension over control of that access to the wider world.”

In The Rising Flood, as the title intimates, there is not just the threat of political inundation, but also a very real risk of the river flooding. That too reflects Juliet’s daily life, “Where I live now is on the site of an old warehouse (we are, legally, still responsible for maintaining a bridge that no longer exists between one warehouse and the next), and when I look out of my window at high tide, the river is above the level of our front door. (I am regularly grateful for the river wall, and the Thames Barrier.) So no surprise that when writing this book, I started thinking about floods, and flood plains, and (looking further down my own river) what happens when people build on flood plains and just hope for the best.”

The Rising Flood is now available in eBook format on most platforms and will be out in paperback in December.

About The Rising Flood

A darkness writhes in the heart of Teren.

The Academy is unleashing demons on dissenters, and refugees rush to leave the capital with nothing but their lives and a hope.

That hope brings them to the city of Marek, Teren’s only major port, which harbours dreams of independence. But Marek is not as stable as it seems.

Marcia, Heir to House Fereno, has spent the last two years fighting to keep Marek safe and prosperous – but with child, her relationship in ruins and the increasing threat of Teren to worry about, can she find her way through? The printing houses of the city run rabble-rousing polemic, penned by an increasingly frustrated majority who feel left out of the rule and riches of Marek. They demand change, and Marcia can’t help but agree with much of what they’re saying.

On the other side of the bridge, the tiny group of Marek’s remaining sorcerers must negotiate their way through troubles of their own. Cato, Marcia’s exiled brother, and Reb, her ex-lover, are trying to train a new generation of sorcerers and both are having problems. Jonas simply won’t take ‘no’ for an answer from Cato; and Reb’s two students feel held back, both know that change, and strife, may be coming – and neither are ready to deal with it. But Reb cannot bring herself to move faster.

Between them, the five sorcerers alongside Marek’s cityangel can expel a single demon. But Teren has many, and other fears loom on the horizon. Out-of-season storms rampage across the Oval Sea, threatening trade – and Jonas’ family, out plying the trade winds – and the unseasonable weather threatens Marek itself.

Menaced by the distant capital, by dissension from within, and even by nature itself – will the rising flood lift all boats?

Or will they be capsized? 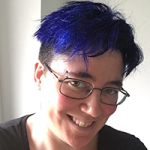 Juliet Kemp lives by the river in London, with their partners, child, dog, and too many fountain pens. They have had stories published in several anthologies and online magazines. Their employment history variously includes working as a cycle instructor, sysadmin, life model, researcher, permaculture designer, and journalist. When not writing or parenting, Juliet goes climbing, knits, reads way too much, and drinks a lot of tea.