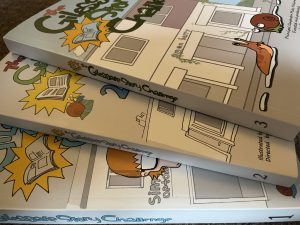 Each year in the small town of Gilesgate, an extraordinary event takes place. In 2019,  to raise money for a different local charity, an optometrist began to hold an annual competition.  Each year dozens, sometimes almost a hundred children take to the keyboard, pick up their pens and submit to the Gilesgate Story challenge.

In addition to raising money for a variety of local charities, the competition’s aim is to encourage children to read and write.

Like many other short story competitions, entries are all compiled into a book. Unlike others, though, every single entrant makes it in. The final book contains stories filled with childhood wonder, dozens of illustrations from a variety of talented artists, and pages stuffed to the brim with heart and whimsy.

Every penny of the proceeds made from the book, which had its launch party just this week, go to charity; this year’s proceeds go to the Durham Wildlife Trust. 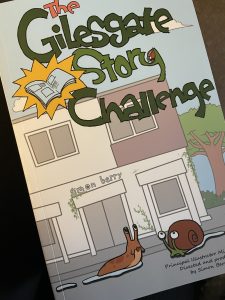 The project is led by Simon Berry, an optometrist from the Gilesgate area. He was the one who began the competition, directs it, and takes charge of the marketing. Alongside Simon, we have Esther Robson, a proud grandmother who helps to keep the team organised. And finally, we have Miles Nelson, the typesetter and lead illustrator of this year’s book, which launched at the beginning of December.

Whilst Simon and Esther organise the competition and judge the entries, Miles works on piecing the book together, typing up each story, illustrating and formatting so that it can be released in time for Christmas.

Miles’ own book, Riftmaster, was released this year by Indie Publisher Elsewhen Press; a signed copy of his book, along with many others, will be appearing as one of the prizes.

One of the competition’s entrants, Dan, aged 11, had this to say about Riftmaster, in a review he wrote for school:

“The plot of Riftmaster is well thought, making every word interesting. The idea of two people being ripped through space to random planets makes for a great story. The idea of Riftmaster gives the author the opportunity to create new places and creatures, which really gives the book an alien feel.

All of the creatures and animals Bailey and Ari encounter are fascinating. Huge caterpillar-like creatures, animals that seem to be like mammals. Each and every thing even referenced in the book is described so well that it’s almost like they’re living on the pages.”

Dan’s story, the Dragon-Mouse, is about Ian, a mouse who thinks he is a dragon. It is one of many wonderful, whimsical and fantastical stories from very talented young writers.

Outside of mice, there are plenty of unique creatures featured in this year’s book. The winning entry of the competition was  about an ordinary slug who just wants to be useful. The runners-up included everything from snails to sinister deer to rainbow trout. It is truly a beautiful, hopeful and at times harrowing look at what the youth of today think of British wildlife.

Today, the competition is in its third year, and still going strong.

In order to keep the project going, Simon is currently looking for volunteers and donations to put together the next book.

He asks that if anyone is at all interested in helping out next year, that they contact him at

or visit the Gilesgate Story Challenge’s social media and website listed below.