In the time-honoured tradition of science fiction writers holding up a mirror to society, using a story ostensibly set in the future or on another planet, Interference explores how grubby political deals would still infect our dealings with other planets and civilisations.

DARTFORD, KENT – 18 January 2022 – Elsewhen Press is a publishing house specialising in high quality, entertaining and thought-provoking speculative fiction. Many science fiction stories address current, real-world issues but through the fictional prism of an alternative society. Interference, the latest story from author Terry Grimwood, well-known for scrutinising politics in his science fiction, is no exception.

Terry says “Science fiction is the perfect lens through which contemporary social and political issues can be examined. Transplanting one or more aspects of the human condition into a futuristic or alien setting gives the writer space to tease out, and study, its heart.”

If a government envoy, trying to examine a foreign request for military aid in a contentious war, becomes aware that what is on offer in return is potentially valuable to their own government, how do they maintain an ethical position? If it would also be personally rewarding, the temptation would be even greater; or if the health of sick family members would be improved…

Peter Buck, Editorial Director of Elsewhen Press said, “Terry very quickly builds a believable setting in which a statesman is subjected to ethical dilemma, profound temptation and unconscionable pressure. Being a science fiction story where the politician is a human negotiating on behalf of Earth with a powerful alien species may make the situation easier to imagine and understand, and in many ways more believable, but it does not make the moral choices any less real. At a time when many of us are rightly questioning the principles and standards of conduct to which our leaders should be held, Interference sheds a light on human behaviour under duress, the ease with which bribery can be self-justified, the inexcusable defence of ‘just following orders’, and how small corrupt deals may be denounced by political leaders or the media but the biggest corruptions are hailed as statesmanship. It was intriguing to see the very same word, ‘interference’, being used by MI5 in their warning on the very day that Terry’s book became available for pre-order. Science Fiction is often prescient!”

Elsewhen Press is delighted to announce that Interference is available for pre-order in ebook and print editions, in advance of publication at the end of this month. 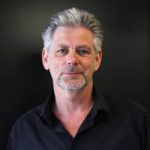 Suffolk born and proud of it, Terry Grimwood is the author of a handful of novels and novellas, including Deadside Revolution, the science fiction-flavoured political thriller Bloody War and Joe which was inspired by true events. His short stories have appeared in numerous magazines and anthologies and have been gathered into three collections, The Exaggerated Man, There Is A Way To Live Forever and Affairs of a Cardio-Vascular Nature. Terry has also written and Directed three plays as well as co-written engineering textbooks for Pearson Educational Press. He plays the harmonica and with a little persuasion (not much persuasion, actually) will growl a song into a microphone. By day he teaches electrical installation at a further education college. He is married to Debra, the love of his life.

The grubby dance of politics didn’t end when we left the solar system, it followed us to the stars

The god-like Iaens are infinitely more advanced than humankind, so why have they requested military assistance in a conflict they can surely win unaided?

Torstein Danielson, Secretary for Interplanetary Affairs, is on a fact-finding mission to their home planet and headed straight into the heart of a war-zone. With him, onboard the Starship Kissinger, is a detachment of marines for protection, an embedded pack of sycophantic journalists who are not expected to cause trouble, and reporter Katherina Molale, who most certainly will and is never afraid to dig for the truth.

Torstein wants this mission over as quickly as possible. His daughter is terminally ill, his marriage in tatters. But then the Iaens offer a gift in return for military intervention and suddenly the stakes, both for humanity as a race and for Torstein personally, are very high indeed.