DARTFORD, KENT – 01 April 2022 – Elsewhen Press, an independent UK publisher specialising in Speculative Fiction, is committed to publishing outstanding books by incredible authors. It is often the case that speculative fiction turns out to be prescient, and in the case of our latest title this is once again true. Simon Kewin is an author of both science fiction and fantasy novels. At the end of 2020, Elsewhen Press published The Eye Collectors, the first book in Simon’s Witchfinder series – a police procedural with a difference, the protagonist works for the Cardiff branch of Her Majesty’s Office of the Witchfinder General, a shadowy arm of government which enforces the law against magical crimes. Somewhat tongue-in-cheek, the story is a whodunnit mystery set in a contemporary fantasy setting. The success of the book ensured that now in 2022, The Seven Succubi, the next title in Simon’s series, has been published. In this latest story, the investigator has to visit the London headquarters of the Office of the Witchfinder General, at 13 Downing Street, an address hidden inside 12 Downing Street and one that shares its garden with Number 10. Sitting on a bench in the garden he notices that “a dead wine bottle lurked in the shrubbery near my feet, and there was another wedged end-on into a bush as if someone had tried to conceal it.” This was written before the ‘Partygate’ allegations were made public. There’s no mention of a broken swing, but nonetheless it begs the question, if such a minor detail in the story is true, might the rest be too?

When asked about the discovery in the garden of number 13 Downing Street, Simon Kewin said “I’ve been asked by the Office of the Witchfinder General to make it absolutely clear that no crystal balls, divination spells, scrying devices or other illicit magics were used in the creation of this description of events in Downing Street. Definitely not. The whole thing is complete coincidence.”

Peter Buck, Editorial Director of Elsewhen Press, says “When we read that scene in the book, we were amused but had no idea how significant an observation it was – not just a throw-away line as we originally thought. Once the Partygate allegations surfaced and were being officially investigated, we realised how prescient Simon had been. He has been allowed unprecedented access to restricted case notes and other material within Her Majesty’s Office of the Witchfinder General, the first time this has been permitted in over three hundred and seventy-five years. So it seems more likely, especially given his assurance that he used no methods outlawed by magus law, that those events have been known to various agencies within law enforcement for some time. Nevertheless, Simon has always been very careful to emphasise the fictional nature of the events in his books, albeit based on the experiences of OWG investigators. But, as is often observed, there’s no smoke without fire…”

The Eye Collectors, the first book in the Witchfinder series, was described by one reader as ‘Dirk Gently meets Good Omens!’ The book has appealed to readers of contemporary and paranormal fantasy, as well as fans of police procedural, true crime and alternate history.

The Seven Succubi, the second book in the series, was published in eBook format in February and is now also available in paperback. 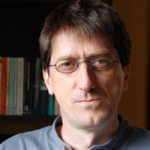 Simon Kewin is a pseudonym used by an infinite number of monkeys who operate from a secret location deep in the English countryside. Every now and then they produce a manuscript that reads as a complete novel with a beginning, a middle and an end. Sometimes even in that order.

The Simon Kewin persona devised by the monkeys was born on the misty Isle of Man in the middle of the Irish Sea, at around the time The Beatles were twisting and shouting. He moved to the UK as a teenager, where he still resides. He is the author of over a hundred published short stories and poems, as well as a growing number of novels. In addition to fiction, he also writes computer software. The key thing, he finds, is not to get the two mixed up.

He has a first class honours degree in English Literature, is married, and has two daughters.

About The Seven Succubi

Of all the denizens of the circles of Hell, perhaps none is more feared among those of a high-minded sensibility than the succubi.

The Assizes of Suffolk in the eighteenth century granted the Office of the Witchfinder General the power to employ ‘demonic powers’ so long as their use is ‘reasonable’ and ‘made only to defeat some yet greater supernatural threat’. No attempt was made in the wording of the assizes to measure or grade such threats, however – making the question of whether it is acceptable to fight fire with fire a troublingly subjective one.

Now, in the twenty-first century, Danesh Shahzan, Acolyte in Her Majesty’s Office of the Witchfinder General, had been struggling with that very question ever since the events of The Eye Collectors. An unexpected evening visit from his boss, the Crow, was alarming enough – but when it turned out to be to discuss his thesis on succubi, Danesh was surprised yet intrigued. Clearly, another investigation beckoned.