Author’s fantasy world has a lot to tell us about how conflict can be resolved in our world.

DARTFORD, KENT – 14 October 2022 – Elsewhen Press, an independent UK publisher specialising in Speculative Fiction, is committed to publishing entertaining books. At a time when conflict is causing problems across the world, economies are collapsing, and winter is coming, escapism has never been more welcome. Fantasy, more than any other literary genre, can provide a means of escape, albeit it temporary; humour can not only entertain and distract but, when used as a satirical weapon, may even be able to help inspiration. The latest book from Mark Montanaro, offers more epic fantasy poking fun at warmongers, dictators and politicians.

The Enchanting Tricks is the sequel to Montanaro’s successful 2020 debut The Magic Fix. The Known World is back, with more magic, more comedy, more fantasy. Not to mention some new characters, unnecessary fighting and incompetent leaders making a mess. If you can imagine such a thing…

Mark Montanaro says, “In a fantasy world of Goblins, Pixies, Ogres, Humans, Elves and Trolls, it’s just about feasible that there could be an enchantment that would make everyone get along. If only there was one that would work in the real world.”

Peter Buck, Editorial Director of Elsewhen Press, said, “In some rather worrying ways, the world around us is becoming more like Mark’s ‘Known World’ every day. Inept leaders and covert factions plotting, lying, fighting, for little more than self-aggrandisement or personal power, with almost casual indifference to their own populations whom they seem to regard as entirely disposable. Even Ogres and Goblins behave better than that! Mostly. Over the last few months, as we have been editing and otherwise preparing Mark’s book ready for production, our world has been getting uncomfortably closer and closer to some of the ridiculous situations in the story. At one point we seriously wondered whether it was too close to home. You might not think that the best way to escape from a world in conflict is to immerse yourself in a fictional one but, in fact, Mark’s story, while a cutting satire on politics, warfare and leadership, does actually give us hope for better times to come while also making us laugh out loud along the way.”

The Enchanting Tricks, is published by Elsewhen Press in eBook format today and will be available in paperback on the 7th November. 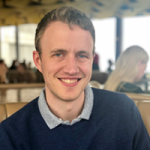 Mark has always been a man of many talents. He can count with both hands, get five letter words on Countdown and once solved a Rubik’s cube in just 5 days, 13 hours and 59 minutes.

His creativity started at an early age, when he invented plenty of imaginary friends, and even more imaginary girlfriends. As he got older, he started to use his talents to change the world for the better. World peace, poverty reduction, climate change; Mark imagined he had solutions to all of them.

He now lives in London with his Xbox, television and non-imaginary girlfriend. He recently embarked on his greatest and most creative project yet: a witty novel set in a fantasy world, The Magic Fix, Mark’s debut book. The Enchanting Tricks is the sequel.

About The Enchanting Tricks

In the Goblin realm, Queen Afflech was doing remarkably well considering the circumstances. She had seen her husband die, and both her sons killed within the space of a couple of weeks. That kind of thing does tend to bring you down a bit.

Losing three kings in a few days looked rather careless. But of more concern to the Goblin warlords was whether it looked weak to their enemies. They suspected the Humans were behind one death and the Ogres behind another. The Pixies were no threat, the Trolls would probably soon be killing one another again, and the Elves were irrelevant (or, to be precise, just annoying).

Meanwhile, King Wyndham wanted to show the Goblins that Humans were not to blame (apart from the two who might be to blame). Petra, the most famous Pixie in the Known World, knew exactly who was to blame and wanted to rescue them. Lord Protector Higarth was determined to help the Goblins with their predicament, whether they wanted Ogre-help or not.

But on the plus side, the dragon’s gone; and there are still plenty of unicorns… maybe they can somehow solve everything?