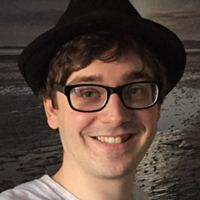 C.R. Berry caught the writing bug at the tender age of four and has never recovered. His earliest stories were filled with witches, monsters, evil headteachers, Disney characters and the occasional Dalek. He realised pretty quickly that his favourite characters were usually the villains. He wonders if that’s what led him to become a criminal lawyer. It’s certainly why he’s taken to writing conspiracy thrillers, where the baddies are numerous and everywhere.

After a few years getting a more rounded view of human nature’s darker side, he quit lawyering and turned to writing full-time. He now works as a freelance copywriter and novelist and blogs about conspiracy theories, time travel and otherworldly weirdness.

He was shortlisted in the 2018 Grindstone Literary International Novel Competition and has been published in numerous magazines and anthologies, including Storgy, Dark Tales, Theme of Absence and Suspense Magazine. He was also shortlisted in the Aeon Award Contest, highly commended by Writers’ Forum, and won second prize in the inaugural To Hull and Back Humorous Short Story Competition.

He grew up in Farnborough, Hampshire, a town he says has as much character as a broccoli. He’s since moved to the “much more interesting and charming” Haslemere in Surrey.

Million Eyes: Extra Time, Twelve time-twisting tales set in the world of the C.R.Berry’s Million Eyes novel was published as a free download from Elsewhen Press on October 9th 2019.

C.R. Berry can be contacted via Elsewhen Press using c.r.berry (at) elsewhen.co.uk