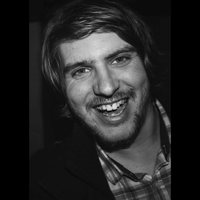 Craig Meighan was born in Lanarkshire, in central Scotland. Both a keen drummer and a fan of science fiction, he grew up wanting to be either Animal from The Muppets or Douglas Adams. This has led to an unfortunate habit of smashing up his computer at the end of each writing session.

With the ambition of becoming a screenwriter, he attended film college in Glasgow. He spent a short time making corporate videos and then after attending one chance meeting, he accidentally joined the civil service. Intending to stay for one summer, he ended up staying for 12 years (so think carefully before inviting him round for tea).

He is too polite to say which of the killer robots, demons and other assorted antagonists that appear in his book, are based on his interactions with actual government ministers.

His first novel, Far Far Beyond Berlin, was written in the evenings, after work, every day for a year, at the end of which time his wife Jen convinced him it was time to finally leave the safety of the office job and pursue writing full-time. She cunningly incentivised him by promising that if he managed to get his book published, he could get a big dog.

Craig lives with Jen, just outside Glasgow, where they like to play softball, enter pub quizzes and do escape rooms. He is delighted to announce that they are expecting a greyhound.

Craig Meighan can be contacted via Elsewhen Press using craig.meighan (at) elsewhen.co.uk