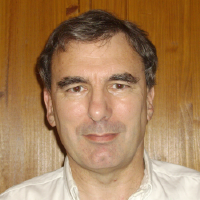 Dave Weaver, a graphic designer, was born in darkest Surrey. He took quite a long time to begin writing. About a decade ago he joined the local Verulam Writers’ Circle and has since had a number of short stories published in various anthologies and webzines. Much of his writing hovers on the shifting borders between fantasy and reality. He holds a particular fascination for the uncertain times of Britain’s Dark Ages, no doubt inspired by the ruins of the Roman town of Verulamium near where he lives with his family and a cat called Trillian. This is much in evidence in his first novel Jacey’s Kingdom

Though born and raised in the distinctly un-exotic heartlands of Surrey, ‘the land of the rising sun’ has held a fascination for Dave since he first visited it with his Japanese wife. A fascination for the beautiful colours of its landscapes and the subtlety of its culture, for its contradictions and certainties, intelligence and passion, spirit and diversity. Yet beneath all these things lies another Japan; one of ghosts and shadows, unspoken secrets, demons from the past and uncertain visions of the future. It’s what makes this intriguing country ultimately unknowable, unique, Nippon… and inspired his second novel Japanese Daisy Chain

Simon, a traveller with time to kill before continuing his journey, enters an inn on the outskirts of London. Inside he meets a motley crew competing to tell tales for their own amusement. So starts Dave Weaver’s new novel, The Black Hole Bar, which has already been compared to Chaucer’s Canterbury Tales and Boccaccio’s Decameron.  It was published by Elsewhen Press on 22nd June 2014.

Dave’s story The Copy is included in the anthology Existence is Elsewhen which was published by Elsewhen Press on 18th March 2016.

Dave Weaver’s disturbing paranormal story The Unseen was published by Elsewhen Press on 11th May 2016.

In Timekeepers, set in the Roman Empire in both Ancient Britain and a dark alternative future, was published by Elsewhen Press on 2nd March 2018.

Dave can be contacted via Elsewhen Press using dave.weaver (at) elsewhen.co.uk