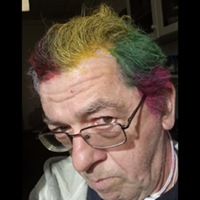 Hugh Duncan hatched in Leicester in 1957. He studied astronomy at University College London and, though very lazy, got his degree. His final thesis was on Martian craters and, after, he worked at the UCL observatory cataloguing the Viking Mission photos.

Having fallen in love with a French woman and wanting to live happily ever after, he ruined that plan by becoming a science teacher. The temporary job became a lifelong career, first in the UK then for 32 years at the International School of Nice, from which he has recently retired. A few years ago, UCL launched the maths journal Chalkdust, in which Hugh has had a number of articles published.

Hugh started in science fiction aged five, when he wrote ‘Dr Who goes to the balloon planet’ and some have said it’s his best work to date. In 1997 he sent off a novel which was rejected by many publishers, including Elsewhen Press. He was talked down off the ledge by Oxford Study Courses, who asked him to write revision guidebooks for IB Physics, which continues to this day.

Inspired by the Mighty Terry Pratchett, for school charity projects he started writing his own ‘Deskworld’ stories, parodying his school as one for witches and wizards. Three dozen stories sold using a captive audience scared of getting bad grades if they didn’t buy them, hmm…

Hugh’s interest in the Turin Shroud has led to a number of articles for the British Society For The Turin Shroud. With Louise Thomas, he translated a 17th century French local history book ‘An Undiscovered Treasure’ by Brother Raphael, and he is making the first English translation of Paul Vignon’s 1938 french science book on the Turin Shroud.

He is a punk at heart. You can’t keep him off stage, even when no one wants to hear him (which is most of the time) and he has managed to force his home grown albums of punk, ska and pop rock songs onto the unsuspecting public, using real musician Rick Preston. There is a good chance that if he makes any money from Life on Mars, he will waste it recording more of his songs. He is also finishing an album based on the life of Mary Magdalene sung by real singer Penny Mac McMorris. Check out his Youtube channel if he ever gets his finger out!

Hugh has been married for 40 years and has four children – most don’t seem to want to leave home in spite of being adults and having to listen to his songs and stories all the time. He lives in the South of France, not very far from the village with two famous house martins who appear in Life on Mars. He owns a Hermann’s tortoise called Sophie Rose.

Hugh Duncan can be contacted via Elsewhen Press using hugh.duncan (at) elsewhen.co.uk