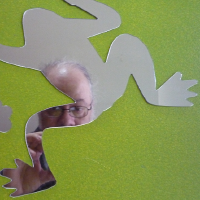 In his past lives, Ira Nayman was, among other things: a cave painter whose art was not appreciated in his lifetime; several nameless peasants who died before their 20th birthday during the Dark Ages; a toenail fungus specialist in the court of Louis XIV; and Alan Turing’s scullery maid.

In his current incarnation, Ira is the creator of Les Pages aux Folles, a Web site of political and social satire that was 11 years old in the first week of September, 2013 (that’s positively Paleolithic in Internet years!). Three collections of Alternate Reality News Service (ARNS) stories (Alternate Reality Ain’t What It Used To Be, What Were Once Miracles Are Now Children’s Toys and Luna for the Lunies!) which originally appeared on the Web site have been self-published in print. Two new volumes of ARNS stories – The Street Finds Its Own Uses for Market Lateralization and The Alternate Reality News Service’s Guide To Sex, Love and Robots were published in 2013. Ira has produced the pilot for a radio series based on stories from the first two ARNS books; “The Weight of Information, Episode One” can be heard on YouTube.

Ira has also written a series of stories that take place in a universe where matter at all levels of organization has become conscious. They feature Antonio Van der Whall, object psychologist. To date, four of these stories have been sold. “A Really Useful Engine” has been published in Even Birds Are Chained To The Sky and Other Tales: The Fine Line Short Story Collection and “Escalation is Academic” has appeared in the anthology UnCONventional. “If the Mountain Won’t Come to Mohammed” can be found in Here Be Monsters. “Thinking is the Worst Way to Travel” has been accepted into Explorers: Beyond the Horizon. Several other stories in the series are currently awaiting editorial decisions at various publications.

In another life (but still within this incarnation) Ira has a Masters degree in Media Studies from The New School for Social Research which was conducted entirely online. He also has a PhD in Communications from McGill University. Ira taught New Media part-time at Ryerson University for five years.

Whoever created the Karmic wheel has a lot to answer for…

Ira’s first novel in the Transdimensional Authority series, Welcome to the Multiverse (Sorry for the Inconvenience), was published by Elsewhen Press on 9th November 2012.

His second Transdimensional Authority novel, You Can’t Kill the Multiverse (But You Can Mess With its Head), was published by Elsewhen Press on 10th January 2014.

A Transdimensional Authority short story and fable from Digitaleusia, He Who Dies With the Most Friends Isn’t Immortal, has been available for free download from Elsewhen Press since 19th April 2014.

The fourth Transdimensional Authority novel, It’s Just the Chronosphere Unfolding as it Should, was published by Elsewhen Press on 8th July 2016.

The fifth Transdimensional Authority novel, The Multiverse is a Nice Place to Visit, But I Wouldn’t Want to Live There, was published by Elsewhen Press on 16th June 2017.

The sixth Transdimensional Authority novel, Good Intentions, which is also the First Pie in the Face of the Multiverse Refugees Trilogy, was published by Elsewhen Press on 1st April 2019.

Ira’s story The Writer Did It! is included in the anthology Existence is Elsewhen which was published by Elsewhen Press on 18th March 2016.

Ira can be contacted via Elsewhen Press using ira.nayman (at) elsewhen.co.uk