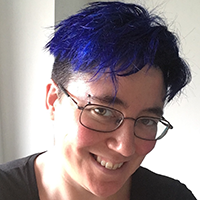 Juliet Kemp lives by the river in London, with their partners, child, dog, and too many fountain pens. They have had stories published in several anthologies and online magazines. Their employment history variously includes working as a cycle instructor, sysadmin, life model, researcher, permaculture designer, and journalist. When not writing or parenting, Juliet goes climbing, knits, reads way too much, and drinks a lot of tea.

Juliet’s debut novel, The Deep and Shining Dark, book 1 in the gripping Marek series, was published by Elsewhen Press on 6th July 2018.

“A rich and memorable tale of political ambition, family and magic, set in an imagined city that feels as vibrant as the characters inhabiting it.”

–Aliette de Bodard,
Nebula-award winning author of The Tea Master and the Detective

The second book in Juliet’s Marek series, Shadow and Storm was published by Elsewhen Press on 3rd January 2020.

“never short on adventure and intrigue… The characters are real, full of depth, and richly drawn, and you’ll wish you had even more time with them by book’s end. A fantastic read.”

–Rivers Solomon,
Author of An Unkindness of Ghosts, Lambda, Tiptree and Locus finalist

The third book in Juliet’s Marek series, The Rising Flood was published by Elsewhen Press on 15th October 2021.

“Fantasy politics with real nuance and believable uncertainty, characters whose richness and depth has developed over three books, and a growing threat that starts pulling together threads across the series make The Rising Flood a fantastic read, while Marek is a textured place that is a joy to return to.”

The fourth, and final, book in Juliet’s Marek series, The City Revealed was published by Elsewhen Press on 20th January 2023.

“‘The City Revealed’ is an absorbing fantasy set in a richly imagined world. A lovingly drawn and diverse set of characters struggle both personally and politically with the consequences of their own and others’ actions, and strive for cooperation without sacrificing principles. A thoroughly satisfying read.”

“Eminently satisfying epic fantasy where the personal, the political and the magical are multilayered and interlocked.”

–Juliet McKenna,
Author of the Green Man series and the Tales of Einarinn series

Juliet can be contacted via Elsewhen Press using juliet.kemp (at) elsewhen.co.uk