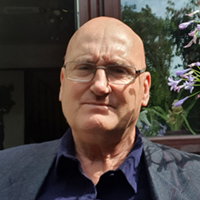 Born and raised in Slough, Mark Iles began studying the martial arts when he was 14 and joined the Royal Navy at the age of 17. A voracious reader he used to devour up to three paperbacks a day – primarily science fiction, fantasy, and horror – by the likes of John Wyndham, Isaac Asimov, Arthur C. Clark, Ray Bradbury, Brian Lumley, Frank Herbert, Stephen King, and a plethora of others. After The Falklands War Mark was drafted to Hong Kong, where he began writing features, for a variety of martial arts magazines, and short stories for a wide range of markets.

In 2012 he decided to challenge himself and undertook an MA in Professional Writing, followed by Diplomas in Copywriting and Proofreading. With over 200 short stories and articles under his belt the book he wrote for his MA Project, A Pride of Lions was published by Solstice – followed by two other novels, a short story collection, and four novellas. His latest novel, Gardens of Earth, book 1 of The Sundering Chronicles, will be published by Elsewhen Press in 2021. Currently Mark is working on the second in the series, as well as another short story collection. Now a 9th Degree Black Belt in Taekwondo, Mark is still involved in martial arts and has also written both a book and an app on the subject.

Gardens of Earth , Mark’s latest science fiction novel, and book 1 of The Sundering Chronicles, will be published by Elsewhen Press in 2021.

Mark Iles can be contacted via Elsewhen Press using mark.iles (at) elsewhen.co.uk