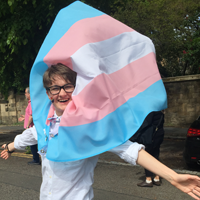 Miles was born and raised in the distant north, in a quaint little city called Durham.

He studied video game design at Teesside University, graduating in 2018. Since then, he has taken a step back from coding to work on his writing career, and has since led several masterclasses with New Writing North.

He has been writing all his life, and although Riftmaster is technically his fourth novel, he likes to pretend the first three don’t exist. Whilst he is primarily a sci-fi writer who loves long journeys, strange worlds and all things space and stars, he has also had brief flings with the genres of fantasy and horror.

He often writes stories highlighting the struggles faced by the LGBTQ+ community, and tries to include themes of empathy and inclusivity in all he does. Even then, though, Miles stands firm in the belief that this is not the defining element of his stories. And although he tries to represent his community as best he can, these themes are never the main focus; because he believes that (in most cases) a person shouldn’t be defined by their deviation from standard norms.

Outside of scifi and fantasy, he has a deep-rooted fascination with natural history, and collects books told from unique perspectives (be they animal, alien, or mammoths from Mars). The older, the better; his oldest book is just about to turn 100!

He currently lives in Durham City with his husband, Chris, who so far seems unworried by Miles’ rapidly growing collections.

The Forge & the Flood, a fantasy adventure, was published by Elsewhen Press on Valentine’s Day, 14th February 2022.

Miles Nelson can be contacted via Elsewhen Press using miles.nelson (at) elsewhen.co.uk