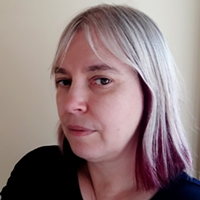 Penelope Hill has wanted to be a writer for as long as she can remember, and her fascination with both futuristic and fantastic worlds has fuelled that ambition ever since. She is an avid reader, a long time role-player and games-master, and loves world-building: designing exotic places, writing mythic histories, and crafting cultures. She’s been a costumer and is busy developing her skills as a textile artist, so when she’s not writing she can usually be found stitching, knitting, knotting, or exercising other creative skills.

During her working life, she spent many years supporting services in local government, and eventually found herself contributing to the development of both local and national policy, particularly around privacy and confidentiality. The research for her PhD helped influence some of that work, but has also brought new perspectives to both her writing and her world building. While she has published academically, she prefers creative writing, and retirement has given her the opportunity to pursue her long standing ambition to become a professional author.

She currently lives in Gloucestershire with five cats, a huge library of books, a treasure hoard of fabric and thread, and far too many dice.

Working Weekend, Penelope Hill’s fantasy novel set at a horror convention, will be published by Elsewhen Press in Spring 2020.

Penelope Hill can be contacted via Elsewhen Press using penelope.hill (at) elsewhen.co.uk