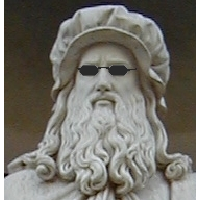 PR Pope has spent many years perfecting the art of avoiding being noticed.  Usually to be found just outside the centre of attention, he has been present at most of the recent decades’ significant scientific breakthroughs.  Now that he has decided to commit some of his tales to paper and ink (or pixels as the case may be) he is being forced to be less reclusive.   He describes himself as four Roman cubits tall, one point six gigaseconds old with a mass of approximately sixty four thousand yottadaltons.  He protects his privacy and is reluctant to talk about his life prior to starting to write fiction, but we have managed to extract the following information from him:

Accidentally pushed through a time-space warp as a child, PR Pope found himself in our dimension.  Lucky enough to find a surrogate family in his exile, he had a fairly normal upbringing: school, university, research institute, international prizes.  Drawing on his innate technological superiority over earthlings, he proceeded to ‘discover’ many of the advances that we take for granted in a modern networked society – frequently passing the credit to others to avoid arousing suspicion.  In the process he made and lost a fortune, but is nevertheless still happy.  He has decided now is the time to commit to print some of the tales with which he was weaned on his home planet.

The Queens of Antares: Bloodline trilogy are his first speculative fiction novels to be published.  He has already been compared to both CS Lewis and CJ Cherryh.

PR Pope’s stories Afterlife, Courtesy Bodies and On the Game are included in [Re]Awakenings, an anthology of new speculative fiction which was published by Elsewhen Press on 21st November 2011. He was also compiling editor.

PR Pope can be contacted via Elsewhen Press using pr.pope (at) elsewhen.co.uk