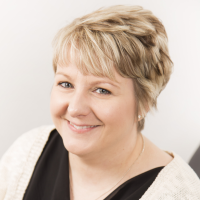 Born and raised in Saskatchewan, Tanya enjoys using the tranquil prairies as a setting to her not-so-peaceful speculative fiction.

She is married with two children which means among her accomplishments are the necessary magical abilities to find a lost tooth in a park of sand and whisper away monsters from under the bed.

As director of a non-profit Francophone community center, Tanya offers programming and services in French for all ages to ensure the lasting imprint and growth of the Francophone community in which she was raised. What she enjoys the most about her job is teaching social media safety for teens and offering one-on-one technology classes for seniors.

Tanya was fifteen when she wrote her first column. She has a diploma in Journalism/Short Story Writing. Today, she actively submits to various newspapers, writes and publishes the local Francophone newsletter for her community, and maintains a blog at Life’s Like That.

Ghosts on the Prairies, A Sacred Land Story, Tanya’s compelling debut novel, was published by Elsewhen Press on 25th July 2014.

Can’t Dream Without You, a novel from the Dark Chronicles, Tanya’s post-apocalyptic supernatural fantasy novel, was published by Elsewhen Press on 8th January 2016.

Tanya’s story Forbidden Fruit is included in the anthology Existence is Elsewhen which was published by Elsewhen Press on 18th March 2016.

Programmed to Breathe, Tanya’s novel of the interactions of AI, artificial life and humans, on Earth in 3161, was published by Elsewhen Press on 26th April 2019.

Tanya can be contacted via Elsewhen Press using tanya.reimer (at) elsewhen.co.uk