It has been twelve years since The War of Ashes, but animosity still lingers between the nations of Sharma and Gavendara, and only a few souls have dared to cross the border between them. The villagers of Jalard live a bucolic existence, nestled within the hills of western Sharma and far away from the boundary which was once a warzone. To them, tales of bloodshed seem no more than distant fables. But events will soon affect them in ways they could not possibly imagine, and what once seemed so distant will be right on their doorstep. Fabled gods and goddesses soon become more real to them 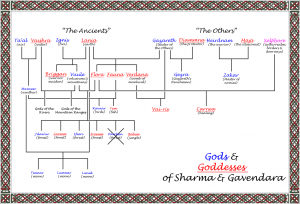 The Avatars of Ruin is an epic adventure series, following a group of people from Jalard as they become embroiled in events way beyond their experience.

Book I of The Avatars of Ruin

The villagers of Jalard have little contact with the outside world, apart from once a year when they are visited by representatives from the Academy who choose two of them to be taken away to their institute in the capital. To be Chosen is considered a great honour… of which most of Jalard’s children dream.

But this year the Academy representatives make an announcement which is so shocking it causes friction between the villagers, and some of them begin to suspect that all is not what it seems. Just where are they taking the Chosen, and why? Some of them intend to find out, but what they discover will change their lives forever and set them on a long and bloody path to seek vengeance…
Read more…