Book IV of    The Bookworm series

A new Emperor has arisen … and the Empire is collapsing into chaos.

Having escaped from the Golden City, Elaine, Johan and their friends – including some strange allies with goals of their own – race desperately towards Ida, hiding place of the ancient Witch-King. Behind them, the armies of the new Emperor – a man permanently poised on the verge of madness – give chase, unleashing monsters and spells from the long-buried past on everyone who stands in their way. Ahead of them, the Witch-King waits, biding his time as he prepares for his ascension.

As they endure terrible dangers – and figures from the past – Elaine and Johan come to realise that Elaine’s knowledge of magic and the bond between them may be the only thing standing between the Witch-King and godhood. But if they cannot prepare a defence in time, the entire world will die when the Witch-King rises from his tomb …

The fourth and final instalment in the Bookworm series, Full Circle follows on immediately from the events in The Best Laid Plans, with Elaine and her friends heading for Ida to confront the Witch-King.

Bookworm IV: Full Circle was published in a digital edition on 2nd October 2015 and in paperback on 23rd November 2015. 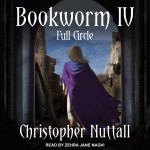