The fourth book in the Royal Sorceress series.

The long-dreaded war between Britain and France has finally begun. French soldiers have landed on English soil and the British Army – and the Royal Sorcerers Corps, led by Lady Gwen – is moving to meet them. But when an inexperienced major disobeys her orders and sends two hundred hussars to their deaths, Gwen accidentally uses her magic to permanently damage his mind and sparks a political crisis at the worst possible time.

In the aftermath of the battle, Lord Mycroft suggests she leave Britain and head to the North American colonies, where British forces are anxiously awaiting a French offensive. The local sorcerers have been poisoned, the local government is barely keeping the colonies under control, the slaves are mutinous and revolution against the crown is brewing. The few locals with any known magical talent are untrained and certainly not ready for combat, but – if they can be trained in time – they may be all that stands between the colonies and defeat.

Accompanied by Irene Adler and Raechel Slater-Standish, agents of the British Crown, Gwen heads to North America. But it may be too late to save the colonies from a disaster that has been long in the making …

In Sons of Liberty, Gwen is sent from the relative safety of London to the colonies, where an undercurrent of revolution still abounds and intrigue and espionage are essential to keep the enemy at bay. But who exactly is the enemy? In the latest book in this exciting alternate history series, Christopher Nuttall expands Gwen’s horizons beyond Europe into the New World.

Sons of Liberty, the fourth book in the Royal Sorceress series, was published in a digital edition on 29th April 2016 and in paperback on 1st August 2016. 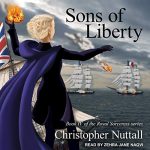