“I know the words written… But the words unwritten? Those, I don’t know.”

In The Unwritten Words, Christopher Nuttall’s story-telling mastery weaves a new epic which follows on from his bestselling Bookworm series and is set in that same world.

After the campaign in the Summer Isle, Isabella rides out the winter storms by studying the godly magic under Mother Lembu, in the process learning about the origins of the old gods.

Crown Prince Reginald receives word that his father the King is ill and his sister Princess Sofia, acting as regent, is imposing a regime that is strangely similar to what had been happening on the Summer Isle – nobles killed, temples smashed, enforced public worship of old gods. Concerned that his family, and indeed his homeland, are in danger, Reginald is determined to return home. But the storms are still raging with what appears to be unnatural force, making any attempt to return to Andalusia too risky for the Prince and his men… unless Isabella can somehow use the new rituals she has learnt to placate the powers behind the storms and navigate the fleet safely home to face whatever has taken control of the kingdom.

The Ancient Lie is the second book in The Unwritten Words series. The first book was The Promised Lie.

Praise for Book I of the Unwritten Words series:

“there’s something about the ancient magic and forces that is almost Lovecraftian in nature.”

The Ancient Lie was published in a digital edition on 17th January 2020 and in paperback on 30th March 2020. 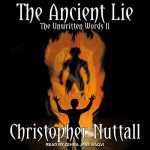