Book I of The Unwritten Words series

The Golden City has fallen, the Empire is no more,
ancient magic threatens the land

In The Unwritten Words, Christopher Nuttall’s story-telling mastery weaves a new epic which follows on from his bestselling Bookworm series and is set in that same world. In The Promised Lie, the first book of the new series, five years have passed since the earth-shattering events of Bookworm IV.

The Golden City has fallen. The Grand Sorcerer and Court Wizards are dead. The Empire they ruled is nothing more than a memory, a golden age lost in the civil wars as kings and princes battle for supremacy. And only a handful of trained magicians remain alive.

Isabella Majuro, Lady Sorceress, is little more than a mercenary, fighting for money in a desperate bid to escape her past. But when Prince Reginald of Andalusia plots the invasion of the Summer Isle, Isabella finds herself dragged into a war against strange magics from before recorded history …

… And an ancient mystery that may spell the end of the human race.

The Promised Lie is the first book in The Unwritten Words series. the second book is The Ancient Lie.

“one of the best authors of entertaining epic fantasy”

“the author has woven an exciting and entertaining story of secrets, dark history, books, werewolves and magic, and knows how to keep the story on the move”

The Promised Lie was published in a digital edition on 23rd February 2018 and in paperback on 25th May 2018. 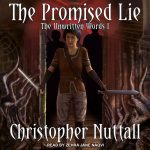