or
Why there are no more mermaids

When widower Angelo found a small baby on the beach twelve years ago, he decided to bring him up as his own son. A sign around the baby’s neck said ‘THOMAS SILENT’, so that was the name he was given. Apart from other people’s curiosity about his name, Tom’s life so far had been happy and uneventful. When he wasn’t at school Tom would help Angelo run the café in his beachside shack. One sunday morning Tom was in the café on his own when a tall, thin, old man called Phillimore came in to escape from the rain. He showed Tom seven bright blue stones that he claimed came from a mermaid’s necklace. When Tom held one of the stones he could almost feel the rise and fall of the ocean. Phillimore left and Tom thought no more about the stones or the strange old man until Angelo died and the café shack was closed.

Six months later when Tom visits the deserted shack, he finds an envelope from Angelo and discovers what else had been found with the baby on the beach. Tom’s simple life suddenly becomes a mysterious adventure that starts with a magical night-time swim to the shore of a strange land. He meets Coralie, a girl hiding in the caves on the beach with Phillimore. The people of the land are held captive to the will of an evil tyrant whose power comes from more of the blue stones, which he has been hoarding in the city of Murmur. Tom realises that he, Thomas Silent, is the only one who can defeat the tyrant and save the people of Murmur. But first he must understand the power of the sea-stones and discover his true self.

This delightful tale of real mermaids and mermen will enthrall any teenager who knows that they are special and have a great destiny waiting for them. Those of us who have left teenage years behind will equally relate to Tom’s personal journey. We have all looked out from a beach and wondered what is over the sea, but so very few of us find out like Tom. 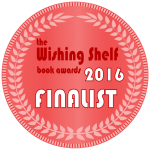 Thomas Silent is a finalist in the Teenager category for the 2016 Wishing Shelf Independent Book Awards.

Thomas Silent was published in a digital edition on 27th November 2015 and in paperback on 1st February 2016.