Sean Lee Levin describes Queens of Antares: Bloodline returned by PR Pope as “a novel that promises to appeal to all ages and delivers on that promise” in an enthusiastic review on She Never Slept. He goes on to say that Pope’s “writing is intelligent and utterly lacking in heavy-handedness.” Sean says that Queens of Antares: Bloodline returned is an “auspicious beginning to a series that is very much in the tradition of classic science fiction novels of years past” and finishes by saying he is watching for the second and third titles in the trilogy with great interest. So are we!

On the Risingshadow website, Seregil of Rhiminee has written a very complimentary review of our anthology of New Speculative Fiction, [Re]Awakenings.  As far as we know, Seregil is our first Finnish reader.  But don’t worry, the review is available to read in English here!  My favourite line from his review is at the end: “If you enjoy reading well written and fascinating stories, this anthology won’t disappoint you.”  Thanks Seregil 😉

The first volume in PR Pope’s Queens of Antares: Bloodline trilogy has been published by Elsewhen Press.

This trilogy is suitable for readers of all ages from 10 to 100.  Already compared to CS Lewis and CJ Cherryh, PR Pope weaves an enchanting tale around three young people who are accidentally transported from their mundane lives to a new world, where they must find the strength to lead a revolution in order to make their way home.  On the way they discover who they really are, where they belong and the enduring power of a bloodline. 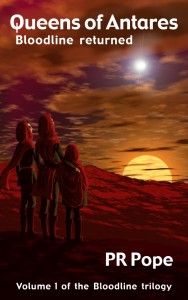 What would you do if you found out your dotty old Gran wasn’t from Surrey after all, but from a planet six hundred light years away across the galaxy? Not only that but she’s really an exiled Princess from a Royal family that has been virtually wiped out by a tyrannical usurper. Would you believe it?

That’s the question being asked by Caroline, Alex and Emily Wright, after moving in with Gran when their Father loses his job.

But you might find it easier to believe, if you were actually standing on that self-same planet looking into a sky with two suns.

That’s the situation in which Caroline, Alex and Emily find themselves when they accidentally get transported across the galaxy.

Would you join the fight for freedom against the tyrant, if that was the only way to get back home to Earth?

Now you understand the dilemma facing Caroline, Alex and Emily.

What would you do?

Queens of Antares: Bloodline returned is available now as an eBook, from all Amazon Kindle stores, all Apple iTunes iBookstores, and soon from Kobo and other eBook retailers.

Amazon have launched new Kindle Stores in Italy and Spain.  [Re]Awakenings, an anthology of new Speculative Fiction  is available in both of the new stores, as well as all the existing Kindle Stores.

I expected this to be an exciting week.  We officially launched the imprint Elsewhen Press, with our first title [Re]Awakenings bringing some new authors to the attention of fans of Speculative Fiction.  Monday morning [Re]Awakenings went straight into the UK Kindle bestsellers charts for Fantasy Short Stories and Science Fiction Short Stories.  By lunchtime we were in the top 10 in both charts and by tea time we were at no 3 in Fantasy Short Stories.  Not bad for a first day!  We crossed our fingers and hoped that the rest of the week would be as good.  Tuesday was much quieter but we were still feeling quite happy when, in the evening, we heard the sad news that Anne McCaffrey had died.  That rather wiped the smile from our faces.  For most of us in the editorial team Anne had been a significant formative influence on our tastes in reading.  She was a fixture in our bookshelves and our hearts; someone that we never imagined being without. The best we could do was sit down with a mug of Klah and tell Harper’s tales.  It helped.

So we are ending this week much less cheerful than we started it.  We are, however, immensely proud to have produced a great book; to have started an imprint catering for people who, like us, love science fiction and fantasy; and to have launched the writing career of some new, young (and not so young) authors whom we whole-heartedly believe will go on to become firm favourites with many readers.

[Re]Awakenings an anthology of new Speculative Fiction was launched today.  As part of the Elsewhen Press digital-first policy, it has been published in a digital edition today and will be published in a print edition in March next year.  It is available on all four of Amazon’s Kindle stores (US, UK, Germany, France) and all 32 of Apple’s iBookstores (UK, US, Canada, Australia, most of Europe).  It should be on Kobo too but hasn’t appeared on their store yet (but it’s not even breakfast time in Ontario yet).

[Re]Awakenings is an anthology of new short stories from seven different authors. It includes science fiction, fantasy and paranormal stories; some are serious, some are not. The authors are: Alison Buck, Neil Faarid, Gingerlily, Robin Moran, PR Pope, Alexander Skye and Peter Wolfe. PR Pope was also compiling editor.

A taster of [Re]Awakenings an anthology of new Speculative Fiction is available as a pdf download (here) for those of you who can’t wait until next monday when the eBook edition is published.  The taster includes the foreword and the first page of each story.  Each of the online bookstores that will be selling the eBook edition of [Re]Awakenings (see a list here) will provide a sample which will consist of an extract from the start of the book, perhaps providing a taste of one or two of the stories but not letting you experience the variety of styles and stories from our galaxy of talented authors. So, at the request of some of our more impatient potential readers (just kidding), we have produced this taster.  It enables you to have a taste of all of the stories in the book, but without spoiling any of them for you before you buy the eBook next week 😉

If you’re not planning on buying the eBook but want to wait for the print edition next year, then this taster is even more apposite.