On RisingShadow.net, Seregil of Rhiminee has reviewed The Empty Throne by David M. Allan. He starts by describing it as an “intriguing debut” because it’s “a high fantasy novel that contains elements of epic fantasy, adventure fantasy and portal fantasy” and is ideal for readers who like “fantastical and light escapism”.

Seregil says David’s story “moves swiftly forward and the author keeps up a steady pace”. He adds that it “has a classic and traditional feel” which is rare nowadays, and admits to having a soft spot for this kind of fantasy and loves traditional fantasy fiction.

He says the world is described well, and much of the “fascination of this novel” comes from the author’s way of writing about how the characters protect the world. He says he was “surprised to find a coming of age tale in this novel, because I didn’t expect it” and was also intrigued to find out that romance is part of the storyline, which he enjoyed and which “lightened the story in a good way”.

He concludes by saying that The Empty Throne is “intriguing fantasy entertainment, because it combines action, adventure, magic and politics”.

His final verdict: It’s good and fun escapism for those who want to take a break from reality.

The weather is still glorious here at Elsewhen Press HQ and our neighbours are all busy keeping the kids entertained during the school holidays. But what about you? The best way to enjoy the weather is with a long cool drink and and a long cool book. Our two latest fantasy releases this summer should fit the bill perfectly.

Last month saw the release of Juliet Kemp’s debut novel The Deep and Shining Dark, the first in a new series that Juliet is writing about the city-state of Marek. Magic is facilitated by an angel that made an agreement with the founding fathers of the city 300 years ago, but it has just stopped working. Reb, a sorcerer, and Marcia, an elite, discover that someone has deposed the city-angel and soon realise that there is a plot afoot to take control of the city. But the city Council connive and conspire, manipulated in a political game. So Reb and Marcia must take action themselves. Exciting stuff! With a gorgeous cover, a detailed map of Marek, and a gripping tale.

Today sees the release of David M Allan’s debut novel The Empty Throne. Four hundred years ago three magicians created a gateway to another world but hostile incorporeal creatures came through;they just managed to defeat that first incursion but failed to close the gateway. Now it is guarded by knights who defend their world from the unpredictable incursions that have been happening ever since. The latest incursion has just started and a kulun has escaped into the world – capable of possessing and controlling humans, it is intent on causing havoc. Provincial rulers are too busy with family feuds, border disputes, deep-rooted rivalries and bigotry to pay attention to the incursions, providing a perfect environment for the kulun. With an arresting cover, and also including a map of the lands, this action adventure across two worlds is riveting.

Both of these fantastic books are available on all the best eBook platforms now. You could be reading them within seconds, for a mere £2.99 each! Find them on your favourite retailer:
The Deep and Shining Dark – eBook retailers
The Empty Throne – eBook retailers

David M Allan’s new novel combines elements of both fantasy and science fiction to examine the glamour of power and the danger of invisible forces that can manipulate and control even the most formidable leaders.

DARTFORD, KENT – 08 June 2018 – Elsewhen Press, an independent UK publisher specialising in Speculative Fiction, is delighted to announce that they have signed with author David M Allan to publish his novel The Empty Throne. Combining swords, magic, other-worldly creatures and ambitious politicians, with a gateway to another world, The Empty Throne is an unexpected mix of traditional fantasy and science fiction, likely to appeal to readers who enjoy the work of David Eddings, Robin Hobb and Juliet McKenna.

In the world of The Empty Throne, there is a Citadel. In it stand three thrones, one of metal, one of wood and one of stone. Between them shimmers a gateway to a new world, created four hundred years ago by the three magicians who made the thrones. When hostile incorporeal creatures came through the gateway, the magicians attempted to close it but failed. Since that time the creatures have tried to come through the gateway at irregular intervals, but the throne room is guarded by the Company of Tectors, established to defend against them. To try to stop the creatures, expeditions have been sent through the gateway, but none has ever returned.

On each throne appears an image of one of the Custoda, heroes who have led the expeditions through the gateway. While the Custoda occupy the thrones the gateway remains quiet and there are no incursions. Today, Dhanay, the newest knight admitted to the Company, is guarding the throne room. Like all the Tectors, Dhanay looks to the images of the Custoda for guidance.

But the Throne of Stone is empty. The latest incursion has started; a creature escaping into the world, a kulun capable of possessing and controlling humans.

The provincial rulers, the oldest and most powerful families, ignore the gateway and the Tectors, concentrating on playing politics and pursuing their own petty aims. Some even question the need for the Company, as incursions have been successfully contained within the Citadel for years. Family feuds, border disputes, deep-rooted rivalries and bigotry make for a potentially unstable world, and are a perfect environment for a kulun looking to create havoc…

The arresting cover is by renowned artist Tony Allcock, encapsulating the atmosphere of the throne room and Dhanay’s shock when he realises the throne is empty. The author immediately liked the cover art for the “air of mystery and feeling of menace”. 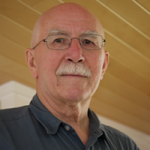 His love affair with science fiction and fantasy had him thinking vaguely about writing but he didn’t follow through until after retirement and his relocation, with wife and cat, to a houseboat on the Thames. It was reading one book which he didn’t think was very good that led him to say “I could do better than that” and then setting out to prove it. David has since had a number of short stories published in online magazines, but The Empty Throne will be his first published novel. 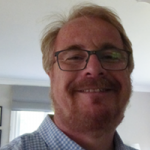 Tony Allcock lives in Hertfordshire and has been both a Research Scientist and a Fine Artist for 40 years. He has exhibited watercolour and oil paintings in galleries and exhibitions in the UK, France and Italy. More recently he has also been painting digitally, illustrating music CD covers and book covers. Under the internet name of 888toto he has been developing digital painting brushes and techniques that have been downloaded by many hundreds of artists around the world. This is the third book cover Tony has produced for Elsewhen Press.